Every Wednesday, you will have two new opportunities to learn more about GVRA. Find additional info here: https://gvs.georgia.gov/press-releases/2021-09-15/gvra-rolls-out-virtua…

Root, Root, Root for the Bravos 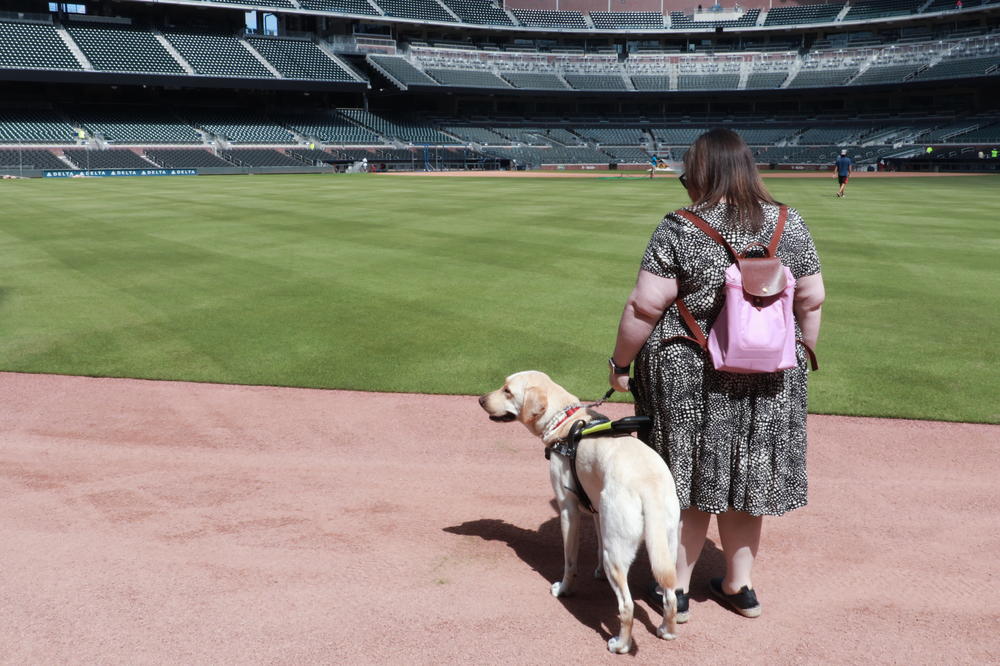 Katie Hearn recently changed offices, just down the hall from her old office. As a rule, change for anyone can take a quick second to adjust. In Katie’s case though, the change required a little more than simply hanging art on the walls and getting office supplies organized. Several years ago, Katie lost her eyesight, and so changes in her commute, even if it’s a matter of a few hundred feet, require adaptation that many of us take for granted. So how long did it take her to adjust?

“Maybe a few days,” she said. “It helps if I can get a mental map of it, and then it’s just doing it enough that it becomes second nature.”

Katie has done a lot of learning since she started work with the Atlanta Braves in 2016, and the vast majority of it has had little to do with navigating the office or the intricacies of the infield fly rule. Katie heads a team during every home game that monitors all the Braves’ social media platforms. If someone fires off a Tweet complaining about the long lines at the ice cream station by the third base concourse, her team redirects more staff members to that area. If someone needs help navigating the twists and turns of Suntrust Park, her team helps them with directions.

“So much of what we do is listening to the community. Listening to people,” she said. “Learning what we can do better and then doing it.”

It was Katie’s ability to engage with the fan community that helped propel her to where she is today. When she first started with the Braves, she was only part time, oftentimes stationed at one of the gates handing out programs as people shuffled into the park. This gave her a great opportunity to chat with fans from all over the southeast who made the pilgrimage to the home of the Braves. From there, she made the leap to Digital Services Representative, a member of the team that she now heads up. By January of this year, her ability to both connect with fans and uphold the mission and values of the Atlanta Braves put her in line for a promotion, and she was moved to the role she currently occupies.

If it weren’t for the spur-of-the-moment decision on a cold evening in February 2016 to apply to be a part of the game-day staff, her path would have looked quite a bit different. At the time, Katie, who had recently graduated from LaGrange College, was teaching at a local high school and coaching softball on the side. But it wasn’t for her. So she decided to make a change, and it quickly paid off.

“I fell in love with it,” she said. “It was exciting being a part the Braves organization and getting to meet so many new people.”

In February 2017, around the time of a certain Super Bowl that Atlanta sports fans won’t soon forget, Katie’s vision began to rapidly decline, and it became clear that things were going to change quickly, and she needed to adapt just as quickly if she was going to keep up. In April and May of that year, Katie went through five surgeries. With her condition stabilized, her ophthalmologist had a single question. What now? The answer, Katie said, was easy.

“Once my vision loss happened, there was nobody that was going to tell me I wasn’t going to go back. I was going to work as hard as I could to make sure that I could go back,” she said. “I was going to try, and everybody here supported me every step of the way.”

In addition, to the support from the Braves organization, Katie knew that she would need help adjusting to her disability, and her ophthalmologist recommended services from the Georgia Vocational Rehabilitation Agency. With VR support, Katie learned how to navigate the world with the aid of her trusty service dog Jack. In addition, she received assistive technology support. Her job very much relies on the use of the social media, and Katie learned how to engage with fans online using voice-to-text programs.

All of this, of course, wasn’t easy. There was the anxiety of wondering if she could do the work. The fear that people would treat her differently. At the end of the day, though, Katie knew that she had one tool that could open any lock. Trust in herself.

Her success and determination in overcoming adversity did not go unnoticed. Earlier this year, Katie made the trek to Midtown Manhattan where she told her story on The Today Show. Was she nervous? Of course, but her worries were less centered around the interview itself than they were when it came to where Jack would be able to use the bathroom. Talking to people comes easy to her. It’s what she does and what she loves.

So, if you find yourself at SunTrust Park as the Major League Baseball postseason draws near and need some assistance, pull out your phone and send a message to any number of the Braves’ social media accounts. Katie and her team will be on the other end of the conversation. And they’ll be more than happy to help.